There are numerous legends about the Pope Lick Monster, from it being a half-human half-goat hybrid to being a resurrected Satan worshiping farmer. The mythology states that to awaken it you have to cross the railway trestle that runs above Pope Lick Road in Louisville, Kentucky. The stories about the monster date back many years and there was a documentary made about it by a local film maker in 1988 and it was also featured on the TV show Monsters And Mysteries. 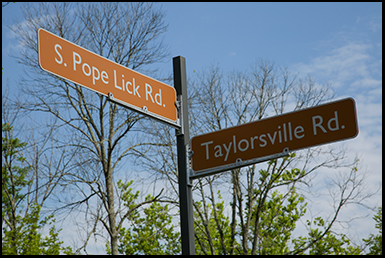 I had flown out to Chicago from the U.K in order to do a 6 state tour of some of the regions most haunted places. One of my stops was Louisville, Kentucky which is famous for being the home of Waverly Hills Sanatorium which I had previously visited on another trip. But what interested me more was the legend of the Pope Lick Monster. It had come to my attention a few months ago when a woman by the name of Roquel Bain died in pursuit of it. But it wasn’t the monster that killed her.

There wasn’t a specific address I could find for the Pope Lick railway trestle but I could tell from the Google map print out I had with me that it crossed South Pope Lick Rd. Although Louisville is fairly urban Pope Lick Rd is quite rural. It’s long and winding with the occasional house set back behind the unkempt grass. I had been travelling for about 10 minutes and was beginning to think that I may have joined the road at the wrong point. Then I rounded a bend and right before it ended, above me was the grey steel structure of the Pope Lick Railway Trestle. I recognized it straight away from the pictures and video I had seen on the internet. However there is nowhere that you can pull over and stop. But there is an intersection straight ahead which is Taylorsville Rd, and if you cross over it there is a car park directly behind the adjacent gas station. I parked my car, grabbed my camera and headed back towards the bridge. Behind me is a wooded recreational area and there were a few people out jogging but heading in the opposite direction to me.

There is a concrete walkway that goes underneath the road and runs alongside the river before coming up on the opposite side. In the distance I could see a freight train go over the trestle. When I emerged from the underpass I crossed over to the other side of the road, from here you can get a good view of the bridge but you only see I fraction of its 742 ft span. As you get closer in front of you there is a shelter with a flat roof that juts out over the path. Just behind it is an overgrown embankment enclosed by a metal fence with a padlocked gate and a “keep out” sign sticking up from the ground. Just beyond this there is a steep slope that runs up to what is the start of the railway trestle. This is where Roquel Bain and her boyfriend David Knee made their way a few months ago before trying to cross the bridge. From where I am standing you can see just how vast the structure is. It looms up above you, goes across the river and disappears into the trees in the distance.

I doubt the couple that risked their lives by climbing across the railway trestle seriously thought they were going to invoke the Pope Lick Monster. But then I’m equally sure they didn’t expect that one of them would die. Looking up at the trestle it looks very high and very narrow and having seen a freight train going across it a few minutes ago it looks like there would be no room to stand either side of it, so the only why out of its path would have to cling to supports and hang over the edge as they attempted. Or plummet to your death. 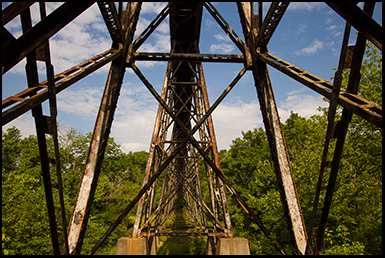 From the news reports I have seen it appears that they must have made it almost to the end of the trestle before the train came. David Knee was able to hang on and Roquel Bain died when she hit the ground across the river and to the left. Even if you were able to hold onto the sides of the trestles you would have to have considerable strength to be able to do so, and then you would have to try and pull yourself back up afterwards. I read that David Knee was a karate instructor which would have meant he was physically very fit. Having just seen a train go by it didn’t appear to be going that fast. But then trying to outrun it would still have been impossible unless you had a considerable head start.  The trestle is almost 100 feet high, and when I picture someone trying to cling from the side of it I can’t help but remember the scene in the movie the Lost Boys where they did the same thing. From what I understand as the train rolls over the track it causes the trestle to jolt violently under its weight. Imagine trying to hang on, and especially trying to hang on after you have just seen someone else fall to their deaths. Freight trains are long and slow compared to passenger trains and it must have taken several minutes to pass. I don’t think the death of a Roquel Bain will put people off from hunting the Pope Lick Monster. On the contrary this has just added to the myth. I wouldn’t be surprised if people will now ghost hunt here as well as monster hunt. 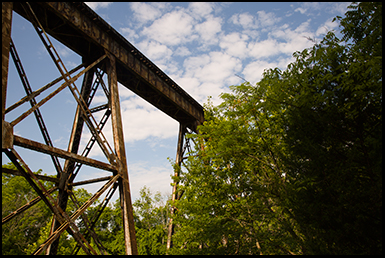 I wouldn’t have heard about the Pope Lick Monster at all if it wasn’t for numerous news reports and Facebook posts about Roquel Bains. I’m sure due to all the publicity the legend will continue to grow. and that the area takes on an entirely different mystique after dark when the sun starts to set and everything is quiet. I would have thought at night time you may be able to hear the rumbling of a train in the distance but clearly this was still not enough of a warning to escape it. From the online research I have done there have been other deaths connected to the Pope Lick Monster but they seem to have been either suicides or accidents. But this seems to be the first one as a direct result of someone actually trying to test the legend by trying to cross the trestle. It is unfortunate that the death will simply increase the likelihood that it may happen again. I walked down the pathway and back over the road until I was at the base of the bridge next to the river. I took a few more pictures and then headed back to the car.

The Death of Roquel Bain – The Daily Mail

The legend of Pope Lick Trestle – Legends of Kentucky

In search of the Pope Lick Monster – Cult of weird