There are many legends about the origin of the New Jersey Devil but one of the most popular is that in 1735 a witch known as Mother Leeds had her 13th child. When it was born it changed into a flying beast with a goats head, hooves and a forked tail. In 1740 an exorcism was preformed and the creature was not seen for a hundred years. Although sightings of the New Jersey Devil peaked in the early 20th century intermittent reports of it have occurred right up to the present day. In the 1960s a $10,000 reward was offered for its capture.

I had flown into Philadelphia from Los Angeles and one of the stops on my road trip was the Pine Barrens, home to the New Jersey Devil. When I arrived it was in the middle of a storm which gradually got worse as I headed south-west to Leeds point. By the time I checked into my hotel it was already dark. 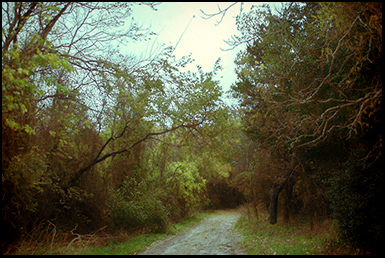 Keep in mind that the Pine Barrens is over a million acres and if the New Jersey Devil is hiding in them then the chances are I’m not going to find it in a few hours (or even a few years). But one thing that is a 100 percent certain is that if I place myself in the same geographical location it will increase my odds, much like buying a lottery ticket. If you don’t buy one the chances of winning anything are zero.

It was about 8 pm when I left the hotel, I had a camera and a flashlight with me. As I headed to my car the wind was so strong it was difficult to stand up. I decided to head towards the intersection of Leeds Point Road and Moss Mill Road. This is the area that according to legend the New Jersey Devil was born. Nearby are woodlands and then if you head back through Monroe’s Swamp Road you near the inlets that run in from the sea. People still regularly hunt for the New Jersey Devil and in recent years there have been several sightings.  In addition the creature has been the subject of several movies and documentaries.

The rain is coming down so hard it’s difficult to see and I have to slow down completely. There are few cars on the street as I drive down Leeds Point Rd and as soon as I reach the intersection with Moss Mill I can see that it’s more of a residential area. Supposedly the house where the New Jersey Devil was born is somewhere around here, but nothing remains but some foundations. There is  nowhere to park while I do some exploring so I decide to take a turn off which looks like it goes into the nearby woods. 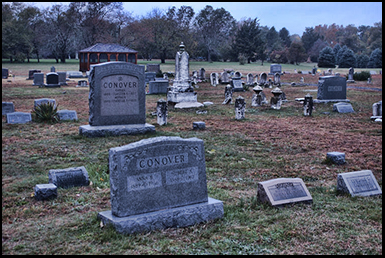 Whether it’s ghosts, monsters or UFO’s, it’s about the possibility of seeing something not the unrealistic expectation that you are going to ACTUALLY see something. As I head into what is a narrow twisting road the wind batters the trees until they feel like they are enclosing around the car, and with a bit of imagination I can start to picture the New Jersey Devil swooping down at me through the darkness. Visibility is so limited I have to hunch forward and try and stare through the windshield beyond the car headlights. There are already a few broken branches strewn across the road, and I wouldn’t be surprised to see a few trees down by tomorrow. After a few minutes the road turns and it looks like it loops back on itself, this is where I can see a track going into the forest. I decide to stop the car and get out for a few minutes. I really don’t plan on being out there long. I turn off the engine and grab the flashlight. I’m leaving the camera in the car as although I’m going to get soaked I don’t want the same happening to my equipment. I run a few yards down the track and beneath a tree, I didn’t come prepared for a storm and the rain seeps through my light-weight jacket in seconds. Looking up at the sky through the tops of the trees, I can’t see any stars and the rain is coming down so heavily it looks like a blanket. I shone my flashlight down the trail ahead and then back around in the direction of the car. Am I really expecting the New Jersey Devil to pluck me up in its razor like talons and carry me away over the tree tops? Hardly. 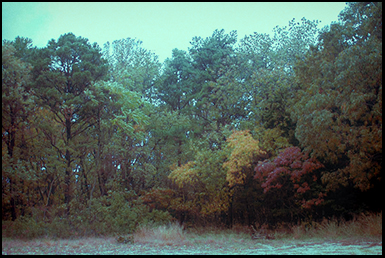 can hear branches snapping and the wind is picking up and whistling down the path. You can imagine anything in these woods on a night like this. But for me whether the New Jersey Devil is real or not, being at the same location where people claim to have seen it, is a thousand times better then any book I could read or documentary I could watch. I’m a firm believer that geography and environment play a huge role when it comes to alleged sightings of monsters, ghosts or any other type of unexplained phenomena. I really doubt your expectations of seeing a ghost are going to be the same if you were in an abandoned Gothic mansion hidden in a forest as opposed to being in a Starbucks in a shopping mall. The psychology of physically being in an area associated with the paranormal or the unexplained cannot be underestimated, and you can only analyze it fully by being there yourself.

It’s only just after 9 pm but after 10 minutes I have had enough, I’m completely soaked. I run back to the car to dry off for a bit. I sat inside peering through the windscreen and listening to the wind for about an hour. I intermittently turned on the flashlight a 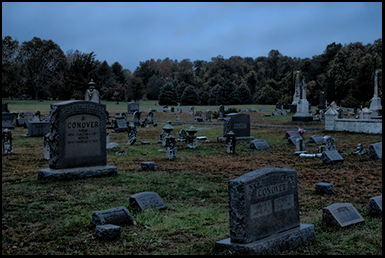 nd shone it through the side window or ahead into the woods. Sightings of the New Jersey Devil are extremely irregular and whether I spent an hour looking for it or a few weeks would probably make little difference. Much like ghost-hunting, to see one you just have to be lucky. I sometimes wonder what I would do if I ever did see a “monster”. In reality I find it highly unlikely that I would be reaching for my camera to take a picture. It was now 10.15 pm, I started the car and I drove back down the way I had come from. On my way I could see the traffic lights and power cables violently swinging in the wind, and a few of the intersections were beginning to flood. It took me about half an hour to reach the hotel. The storm seemed to rage on through most of the night.

The following morning the rain had stopped and I decided to take a drive around Leeds Point in the early morning. It was 7 am on a Sunday and the streets were empty. I headed towards Monroe Swamp Rd which runs close to the water and is a wildlife preserve. It looked like considerable storm damage had been done and I had to turn back along one of the roads as there was a tree blocking it. The sky was still grey and overcast and it started to drizzle again. I drove around the area for about an hour and then headed back into Leeds Point.

According to reports in recent years there have been sightings of the New Jersey Devil in the local graveyards. As I was heading out of town I came across a small cemetery next to a church. I parked the car, got out and took a few pictures and then proceeded west to my next destination.