Located on the north west side of Death Valley, in the shadows of the Yucca mountains where over 600 atomic bomb tests were carried out during the 1960’s, Rhyolite was once a thriving mining town. Born out of the “Bullfrog Goldrush” of 1905, once the gold came to an end, the town soon followed.  The population peaked at around 10,000, and the town was once home to a bank, a school, a post office, and a hotel. Gunfights were a common occurrence in the saloons that once lined the citys main street. But less then ten years after the gold rush that brought prosperity to Rhyolites many citizens, there were only ruins.

The nearest town to Rhyolite is Beatty, where there are several hotels and casinos. The hills behind

the town were once used for atomic bomb testing in the 60’s, and many miles away on the other side of the ridge is the top secret Area 51 military base. Rhyolite is always open, I stayed the night in Beatty and arrived there at about ten am in the morning. It’s just off of highway 374 that runs past it and beyond into the desert. Although it’s an abandoned ghost town, it’s easily accessible as a paved road still runs through its center, and there are well maintained minor dirt tracks running around the outside. There is usually someone that lives on the site in what is known as the bottle house, and they also acts as a sort of unofficial tour guide.

A lot of ghost towns are nothing more then a few pieces of rubble, but many buildings in Rhyolite are well preserved, and some appear almost livable. Rhyolite ghost town is a slightly more

recent one then many, dating from the early 1900’s. But just the fact that it’s located on the road to the east gate of Death Valley gives it a degree of infamy. As you drive into town, on your left hand side you will notice what is referred to as the open air museum. This consists of some quite striking ghost sculptures lined up on the slight hill that stretches out to the desert. A little further up is the Bottle House where you can park your car. You could walk around the entire town in about an hour, but it’s a large area to cover and being the desert it can get extremely hot. But if you chose to make the tour by car there are lots of places to pull off on the side of the road next to the buildings.

The Bottle House was built in February 1906 by Tom Kelly one of the towns former inhabitants. It is

actually made out of 5000 bottles, and it has been restored to the point where it is once again habitable. Outside there’s a few guide books on a table, once enough people have gathered the occupant of the house comes outside and starts reciting a brief history of the town. This is free of charge, but obviously a tip is expected. As you might expect of someone being the solitary occupant of this abandoned town in the middle of the desert, the “official guide” is definitely larger then life, but somehow seems to fit in with the surroundings. Like many places in the West Rhyolite ghost town was born out of the gold rush, and also like many towns, died when the gold rush ended. At one time there was a rail link to the town, running through the desert from Las Vegas. In 1936 Rhyolite briefly found life again when the former railway station became a casino, but this soon closed. The location has however been used several times in movies, one being the recent cult classic “Six String Samurai” and also Cherry 2000 with Melanie Griffith was filmed here in 1988.

The guide book I had is called “Rhyolite death valleys city of golden dreams”. The interesting thing about this book is the fact that it has a lot of pictures and maps of the town and its occupants when it was at its prime from 1905 to about 1910. And as you walk around the ruins, you can put pictures to the faces that once lived here. You can also see what is still there now, and how much of it has vanished back into the desert. If you drive north up the main street, on the left hand 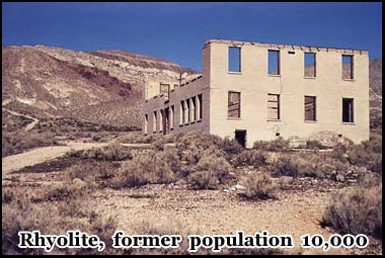 side are the ruins of the school house. This and the Cook Bank building are probably the largest and most recognizable remains in the town. The school house was completed in 1909 at a cost of $20,000 but by that time the town was already in decline. The classrooms themselves were half empty. The roof of the school is actually missing, but you can still see it if you go back to the town of Beatty a few miles away. It has been used in their own school house, along with the windows and part of the wooden structure. Rhyolite although born out of the gold rush, was also a thriving community. Many of the lost ghost towns of this area didn’t have such facilities as schools, but were composed of cheap boarding houses and saloons, where the miners could gamble away their money. However Rhyolite due to its mining also had a large transient population.

I think most people including myself, seem to think of cowboys and gun fights on Main Street belonging to the 1800’s but this was clearly not the case. There is an interesting account of an incident reported in the Rhyolite Herald newspaper on December 15th 1905. It tells how John Sullivan and James C. Clayton fought to the death in the Monaco saloon, during which eight shots were fired at almost point blank range. One man died instantly from his injuries, the other only

managed to survive another half hour. On another occasion May 18th 1906 deputy Sheriff McDonald shot dead a man by the name of Steve O’Brien who had murdered his wife. But despite this lawlessness it was till not until 1907 that Rhyolite got its jail. At this time law and order had fast come to most American city’s, but there were still relics like Rhyolite, from the last century, where the west was still wild. And due to its geographical isolation from major cities that it still retains, it took longer to catch up with the rest of the world. This does however add to its mystique and is undoubtedly why it still attracts a steady stream of visitors to this day. Even at this time in the morning it is uncomfortably hot. The sky is clear and blue, there is no shade and this isn’t even the height of summer.

Being the desert it also gets extremely cold at nights. Although the town did have electricity and running water, to live in this sort of climate without the modern comforts of air conditioning or heating must have been very unpleasant. But it was only the lure of making a vast profit from gold that kept the population here, and when that was gone, they soon left. Further up

the road from the school, are the remaining upright pillars of the Overbury building, this at one time was a three story building that housed the Rhyolite National Bank. I parked the car and took a few pictures, then walked across the street. Here is what remains of the Porter Brother’s store where they sold food, and mining supplies. You can still see the stone storefront marker at the top of the archway. I walked a few more yards up the road. On the other side of the street are the remains of the Cook Bank building, this is probably the most photographed ruins in Rhyolite ghost town. It was once the tallest building in the town and is an impressive structure silhouetted against the flat desert, and blue skies. It once held two massive bank vaults, and had floors made of marble, imported from Italy.

I got into the car again and drove to the north end parking lot. In the guidebook there is a map of the town as it was from 1909. Although there is now only one main paved road, the streets that used to e 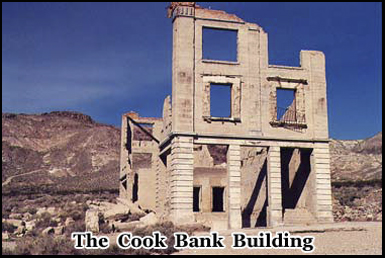 intercept the town were Colorado , Broadway, Esmeralda, and Cochran and Golden. Looking at the map, the Cook Bank Building is standing on what was once Golden. If you head up to the top end of Rhyolite this is where the Las Vegas Tonopah railroad station still stands. It is probably one of the best preserved buildings in town as it was once restored for use as a casino in the 1930’s. Now it is privately owned now, and there is a fence all the way round it to keep people from going inside. The first train rolled into town in 1907 bringing in freight and passengers, from Las Vegas which is about 120 miles away. The station also once contained a restaurant. The railway tracks themselves are no longer there but if you look into the desert you can just make out the path where it once ran. I got back into the car and took the dirt track that circles round the perimeter of town.

You don’t need an off road vehicle to go down it, it’s just a bit of a rough ride. This detour may give you a bit more of an idea of how large the town was, and that it extended well beyond the paved roads of the main street. I think most people tend not to go off the main street,

but aside from the additional ruins there is also some desert wildlife to be seen. There were dozens of what looked like jack rabbits that you could see hidden in the desert shrubs, that disappeared down into the ground at the sound of the car. Also along here there are a few foundations that are barley visible as they poke from the dirt. But there is an almost intact single story house which was once owned by a lady by the name of Mabel Vaughn. If you look inside you can see the remains of a concrete sink. This was also the location of the town’s red light district, although little remains of the area. If you head on down the track a bit further, you can also see what is left of the county jail. It actually contained six jail cells at one time, and the judge’s courtroom was in the front, although it was primarily used to hold drunks, more then gun carrying outlaws. If you continue ahead of you down the dirt track, you will again come to the main road and the tour concludes.

The town’s demise came quickly, although a handful of people remained for many years afterwards. In 1910 there were less then seven hundred people from a peak population of 10,000. As gold prices dropped the residents and merchants moved on. In 1911 the light and power were turned off in the town. In 1916 the Las Vegas Tonopah railroad carried its last passenger. By about 1920 less then a few dozen people now lived among the buildings that were rapidly falling into disrepair. The Rhyolite ghost town had almost gone full circle, and much of it was reclaimed by the desert.

Rhyolite-Little More Then A Memory – Legends Of America