Don’t forget psychics that are in the business of investigating haunted houses, can do research like anyone else. Most people with an active interest in the paranormal already have prior knowledge of dozens if not hundreds of haunted locations through browsing internet sites, reading books or watching one of the many programs on the paranormal. They may not visit a haunted location and pick up its history by claiming to be psychic, but they could. Why does a psychic go to a haunting location, because it’s supposed to be haunted? How do they know it’s haunted, because there is information available to say it is? How many of these psychics do you read about going to a location where the haunting has only manifested itself recently? How many places do they go to that have a long history of paranormal activity?

The same Cold Reading techniques that can be used to give a psychic reading, can also be used to make deductions from the exterior/interior of a location. There are many associations that can be made just from the era, decoration and geography of a building. For example, what if a psychic visited a haunted castle in England and then claimed he sensed the ghost of a knight that has been killed there. The medieval time period was an extremely violent one, and a castle was built solely for military purposes so it’s highly likely that someone did die violently. The psychic can even give a general description of the knight, as soldiers during that time period wore some sort of basic uniform much as they do now. Due to the time period you can rule out the knight’s death as a shooting, that really only leaves being stabbed with a sword or hit by an arrow. For added effect some psychics will claim to become possessed by the spirit of someone that died violently. In this scenario they can simply use a generic description such as “I feel something sharp, there’s a terrible pain in my side”. Something sharp of course could refer to a sword an arrow, or an axe.  The chances are that whatever they claim to be picking up psychically, its completely unverifiable after so much time so they can come up with completely fictitious scenarios and state them as” fact”, knowing that it isn’t. How many psychics have you seen visit a haunted location, that it’s verifiable that they have o 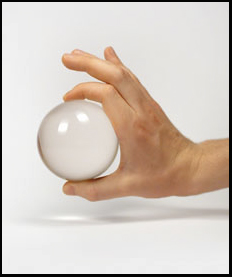 no previous knowledge of? Why couldn’t they be led to a location blindfolded, as they claim to be using only their psychic abilities, why would they need any visual clues at all? Even if a psychic does come up with a specific name, it has to be taken into account the amount of potential names that they have to pick from. If they were at the site where a battle occurred and came up with a name of a soldier, if it was a major battle such as Gettysburg then they would have a pool of almost 150,000 names to choose from. If they said I am picking up the name of a soldier called William Jones and research uncovered that there was a soldier of that name at that location, with 150,000 people to choose from this still doesn’t demonstrate any form of psychic ability. Another claim by some mediums is that they can point to a location ask a spirit to appear, then take a picture with a digital camera and an orb will appear on it. Aside from the fact that there is little evidence to suggest orbs are actually paranormal, how many picture have they actually taken to achieve that result. When 20 or 30 pictures have been taken but only one has an orb on it, they will still claim that the spirit responded to their request. Well if you asked them to show themselves and you have 1 orb picture and 29 with no orbs on it, they didn’t respond and it isn’t a sign. You could go into the same location and not ask the spirits to show themselves and still get orb pictures, providing you take enough pictures.

How many psychics accompanying paranormal investigators to a haunted location have undergone any controlled testing at all? But by accompanying what are in many cases objective, intelligent people, that use scientific investigation techniques to research the paranormal, this someone how gives the psychics an undeserved credibility. But in reality credibility by association is actually no credibility at all. And all the paranormal researchers have done is take along an unproven entity to provide proof of an unproven entity. Should psychics and paranormal investigation ever be used to valid each other ? Don’t assume that because someone claims to be a paranormal investigator and makes the standard claim about how they investigate using scientific methodology that they even know what scientific methodology is. Also don’t assume that they have even a basic knowledge of cold reading or the other tricks of the trade that psychics use. Along with Orbs, psychics can almost guarantee a never ending source of evidence which many paranormal investigation groups will claim is genuine, but in reality is completely false.

In the majority of cases a person that witnessed an apparition will not have the opportunity to validate their experience with anything other then an eye witness account as it was a unique occurrence. But testimony alone in support of psychic claims is not sufficient to be considered as evidence as the circumstances are not comparable. The claims that paranormal investigators offer to justify their use of psychics, if true, can be validated because they are repeatable. If they are convinced that their psychics are genuine then it is their responsibility to provide credible evidence by having these claims independently tested. But they are not going to submit them for testing if the evidence they are promoting is false, so their only defense is to not allow it to be challenged, which makes them as fraudulent as the psychics.

How Psychics Can Assist Paranormal Investigators – Ghosts And Ghouls