It’s implied that protection rituals invoke some sort of spiritual power. They may have a psychological purpose, but if it’s psychological it’s not spiritual. Why would anyone think that an evil spirit is not going to harm you because you read some incantation or light a candle? It may protect the practitioner psychologically, but then so would the words “This is all complete nonsense”. But again much like people warn you the Ouija board is dangerous, they also stress the importance of “closing it down” after you use it, and another myth is again reinforced until someone starts questioning it.

Many of these rituals are based on particular religions, why would an evil spirit respect any religious beliefs at all, that certainly wouldn’t make them very evil. Out of the 1000’s of mainstream religions and the 100’s of not so mainstream ones how do you know you are going to be using a ritual that 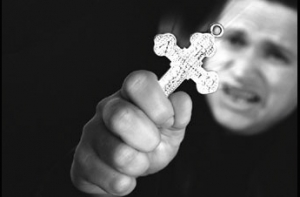 would have any relevance at all to any that an entity may have followed in its life. If they didn’t abide by the philosophy of a particular religion in life why would they in death. What happens if the ritual was Christian based and the spirit happened to be Jewish or an atheist. Why would a few sentences keep an “evil spirit” at bay, as they really can’t be that evil if you ask them to go away and they do? Surely if they had done something as monumental as cross over into the world of the living they wouldn’t let a few words stop them. Protection rituals may work as a psychological tool, and by doing them, it may make you believe that you have protected yourself. But then rather then recite a protection spell, dressed up with references to gods, and higher powers why not just say to yourself “I am not afraid” or “I don’t believe”, surely just as effective. Other rituals such as exorcisms are used to combat entities that include Demons. But the only place that Demons exist is in the minds of those that created them. By having a specific ritual to defend against something which is a myth, only gives power to the myth, nothing more. The claims that people can help a spirit pass on to the other side or perform cleansing rituals are equally without merit. You wouldn’t communicate with someone in a ritualistic form when they lived so why if would you do so if you believed that you could communicate with them after death? And if you have created such an elaborate scenario that you believe that you must perform a ritual to stop an evil spirit, you’re actually just scaring yourself and by doing so giving it a power it would not otherwise of had.

Protecting Your Energies – The Pagan’s Path