Why is it that the vast majority of ghost pictures of “faces” or “full apparitions” are either hidden within other objects, so distant that they are impossible to make out, or are shapeless forms. The reason is of course that they aren’t ghosts at all. Take almost any picture where there are shadows, contrasting textures and light levels, tell people the location where it was taken is haunted and they will try to find a face or figure in it that they can call a ghost. Enlarge the image for “clarity” and over pixelate it, and even the pixels themselves can provide a join the dots pattern to create whatever you wish to see. This is known as pareidolia.

The most common examples of pareidolia in relation to the paranormal are seeing ghosts in grass, trees or hedges, these are ideal for creating non existent images because of the curved forms, gaps between them which allows the light to produce patterns, and contrasting shades and colors. Many of these characteristics will of course shift and change under even an light breeze so you could take 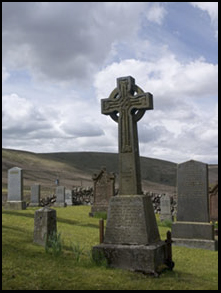 one picture of a “ghost” take another one in which the ghost isn’t there and claim the image is legitimate. The most extreme example of pareidolia, is seeing faces in Orbs which can occur if you enlarge the orb picture to the point that what you want to see actually appears. At this moment the image will in fact bear no relation to what was actually there at the time. It is just a game in which you join the “paranormal” dots. This is the equivalent of seeing the face of Jesus in a cheese sandwich. Other popular examples of pareidolia in relation to ghosts are erosion and damp, on walls and gravestones which forms patterns for the brain to focus on, and images in windows which randomly reflect light to form faces and figures.  If you are a ghost and you have the ability to be invisible why are you going to manifest yourself then hide in a tree, why not retain your invisibility which is going to be the greatest way of hiding yourself. And are you really going to make the journey from the “other side” just so you can disguise yourself as a damp stain halfway up the crumbling wall of a castle? And what about the logic of proportional size? Few genuine reports of full apparitions describe their height or features as being anything different then that of a living person. And yet, some of the “faces” people believe they see, range anywhere in size from a few inches, up to several feet. This would mean that the related bodies to these apparitions would be from a couple of feet to ten feet, or more.

When people are shown a picture of a location that is meant to be haunted they automatically start looking for ghosts, just as if you were shown a picture of a wedding the first thing your going to start looking for is the bride and groom. You brain isn’t going to start searching for pictures of the moon when it’s told it’s not a picture of outer space. People just believe many photographs are spirits because the location is associated with a haunting, not because they are actually pictures of ghosts. The problem with this is that you can go anywhere with a terrain that lends itself to producing patterns that can be formed into ghosts and find the same images whether it’s haunted or not. It’s just a combination of auto suggestion and the brains creative process. It is also another example of people having false expectations that they are going to capture a ghost on film every time they go ghost hunting and when they don’t capture a full apparition they will just create images from nothing in order to satisfy these unrealistic expectations. All these false ghost photographs do is dilute the validity of what may be genuine apparitions on the rare occasion one is captured.

Pareidolia : Why we see faces in hills, the Moon and toasties – BBC News

A type of illusion of misconception – The Skeptic’s dictionary

Seeing things that aren’t there – Earthsky