The key to whether it has any power or not is if the pointer is moved by a spirit or a human being. If you only get discernible information when you can physically see the board and garbled messages when you cant, this proves that it only works as a result of human intervention, and if this is the case then it’s not to do with a spirit. There is a condition referred to as the ideomotor effect, that is a subconscious muscle movement, and it is this, not spirits that cause pointer to move. When using an Ouija board try this simple experiment, blindfold the participates and get a third party to record which letters they move the pointer towards in response to a question. Or use the board in complete darkness, with an infra red camera so you can film the results, and review them later. It is important that the board is only placed on the table once the participants can no longer see it, so they won’t know the approximate location of the letters and then simply remember them. The defenders of Ouija boards claim that because the “spirits” are channeling through the participants they need to be able to see through their eyes. And yet supposedly at other times these same spirits can walk around a house and move objects independently of anyone so why don’t they just do that and move the pointer around the board. It’s completely illogical of course but this doesn’t stop supporters of Ouija boards from moving the goal-posts each time anyone points out how flawed their claims are. One other test is to get a non participant to open a book or magazine to a page selected at random, place the object out of view of the participants using the Ouija board and ask them to spell out the first sentence on the open page. In any of these experiments the results you get, will be completely nonsensical. Ouija boards are one of the most easily tested of any of the claims regarding the paranormal, it doesn’t require that you have to spend what may be a lifetime waiting for a ghost to appear, all you have to do is gather a circle of people together around a board. You could test it virtually, at a moments notice, on any day of the week, but why is it never tested? It’s because people prefer to believe these unproven scare stories rather then rationally try to discredit them, and as a result these myths continue to propagate.

The claims that Ouija boards are a “tool” that can be used in paranormal investigation just like any other tool are incorrect. You can use a camera and the consistently verifiable results are that it takes pictures, you can use a digital thermometer and the consistently verifiable results are that it will measure temperature. A Ouija board has no verifiable results to show that you can use it to contact the dead. One of the other claims made by people is that by using a Ouija board you are opening yourself up to spirits because you are trying to contact them, and not being selective about what sort of spirit you may let in. But what about paranormal investigators that walk around using tape recorders asking the spirits to leave them E.V.P’s, or ask them to show themselves so they can be photographed, why don’t they let in evil spirits? Their not being at all selective about who they contact, they never ask only for good spirits. They never use any opening or closing rituals as your supposed to do when using a Ouija board but they don’t seem to suffer any negative effects compared with those claimed as a result of the use of a board. If the spirit has enough power to physically move several people’s hands in order to move a glass around a Ouija board, then why not just move the glass directly. And if the spirits don’t move the glass directly but instead give subconscious messages to several people, that in turn tells them to move the glass to spell out a word. Why not just give a conscious message to someone directly, isn’t that the same way a medium receives a message ?

If as is claimed Ouij 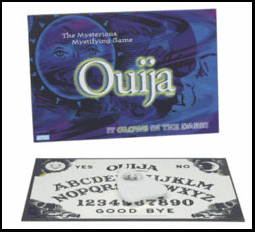 a boards only works because of the collective power of a group of individuals, then surly there must become a point where this power increases so that it can move the pointer independently or it could give a direct message to one of the participates. The power can’t remain constant if the “source” varies by several people. And if it is a spiritual power it wouldn’t require a physical means of seeing the board. Investigators trying to capture E.V.P’s often ask collectively for a spirit to leave them a message on their tape recorders, this doesn’t open any portals to the spirit world , but Its exactly the same process. There are many unsubstantiated claims about the power the board has, but very few people actually perform even a single test to confirm if it has any or not. It’s like investigating a haunted house and not checking to see if the reason there is a “cold spot” is because there’s a window left open. Despite all the claims from people that they have produced tangible results when using a Ouija board, under conditions that eliminate any man-made influence, where is there any evidence? There are many independent University’s or research organizations with parapsychology departments that would be willing to test their claims. But the simple reason that people haven’t proved them is because they can’t. They may not be able to physically prove they are talking to spirits via the board to produce the information, but as the information it is claimed to produce is physical, this can be tested. And isn’t submitting your evidence for testing going to be the best way to confound any skeptics?

Many of the stories regarding Ouija boards involve people’s claims that after they used them something bad happened to them, or someone they knew. But bad things happen to people everyday who have never used the Ouija board. Where has it ever been proved there is a link between Ouija board use and the claimed negative results that have occurred? People simply attribute man-made causes to spiritual ones without any proof of at all. There have been claims that after someone used a board, they lost their job or a friend got in a car crash. But people lose there jobs and get in car crashes everyday, this is nothing to do with the Ouija board, in these examples it is however to do with bad economic conditions, poor performance, or bad driving. Ouija boards can also of course give someone an excuse to avoid taking responsibility for their own actions by blaming it on an inanimate object. People often point to the fact that the negative events that they attribute to the boards use have all occurred within such a short space of time that it couldn’t be coincidence. But in fact often these multiple events are as a result of each other. For example what if someone claimed that after they used the Ouija board that their car was stolen they lost their job, and their marriage broke up. Firstly if their car was stolen, could it have been that they left the door unlocked, or they parked it in a bad neighborhood ? And who stole it? It wasn’t a spirit, so who was actually to blame, it was a car thief, no one else. And if someone’s car was stolen, might that not have meant that it was impossible to get to work or as they had to use other means, they were always late, and that’s why they got fired. If the person got fired, wouldn’t that mean a financial strain on them, and without a car it would be harder to find work. And would it not only put pressure on them but also on the marriage. Also bear in mind that 1 in 4 marriages fail, so if a marriage did end it wouldn’t be mysterious or paranormal even if the person had used a Ouija board.

If an evil spirit where to cause all these bad things to happen to people, why would it go to so much effort to make everything look as if it could have been done by an alternate completely explainable method, and receive none of the credit for it? If it could possess the boss at the office to fire you why not have him write on you final written warning, that their firing you because “Satan told them”. Or if using a Ouija board can cause a car crash, why not have the victim scrawl in blood on the front windshield a pentagram or 666 etc. Ridiculous, of course, but no more ridiculous then suggesting it was as a result of a demon released by a game you can get at Toys R Us. The misinformation also includes claims that the boards must be disposed of in a certain way, such as being burnt. There are probably more people that have been physically harmed by trying to burn a Ouija board then have ever been harmed by using one. And as for the scare mongering about how the spirits made the board so hard to burn, try burning any board-game, it is made of compressed layers of cardboard not paper. And it while it may be true that using Ouija boards can have damaging psychological effects isn’t the best way to combat these by trying to disprove it, not by simply advising people not to use them at all. All this does is add to the misconception that they are dangerous. But it would be the paranormal world’s equivalent of suddenly discovering there was no Santa Claus. But you have to have a few bogeymen to add some excitement to what can often be a tedious and uneventful subject to research.

The reason Ouija boards are dangerous psychologically is because people continue to believe in its power when there is no evidence that it has any. This is the same principals that give Voodoo and Witchcraft power, no proof that it works, just peoples refusal to question it. Do people think there is some sort of “magic dust” sprinkled on it when it’s made in the factory in China? The Parker Brothers edition says on the side of the box “for ages 8 and up”, that’s because it’s a toy. The reason you must be at least 8 is because you may get paper cuts from the board not because you will be sucked into a portal in hell. If anyone actually attempted to prove that a Ouija board worked as a result of spiritual manipulation not subconscious manipulation , and applied some logic to any results they may have, then the Ouija board would be exposed as the urban myth that it is.

Ouija, Not A Game – Ghost Research

The History of the Ouija Board – Smithsonian