The Ghostly Monks Of The Mission San Antonio de Padua

James Dean was killed in a car crash on September 3oth 1955 near Cholame, California. His death at such a young age made him an instant legend. Today, people continue to make the pilgrimage to the lonely spot beside the number 46 freeway, where he met his end. The Mission San Antonio de Padua was founded in 1771 by Father Junipero Serra, the last in a series of three built throughout southern California. It was in use until 1883 when it was abandoned. In 1903 the mission was partially restored, until a massive earthquake again halted building. Today the mission has been rebuilt, and is still operated by the Franciscan monks.It is believed to be haunted by several ghostly monks and an American Indian.

Both the Mission San Antonio de Paduaand and James Dean’s crash site are fairly close to each other, about halfway between Los Angeles and San Francisco. If you are heading to northern California on the 5 freeway you can visit both sites, and cut across to the 101 to continue the journey. The site where James Dean crashed is near the small town of Cholame at the intersection of highways 46 and 41. The actual location is at the junction just past the sign indicating Fresno and Bakersfield. There is nothing officially marking the event, but when I was there, there was a bunch of flowers by the freeway which I assume were placed there by one of the many fans James Dean still has .

I parked for a few minutes by the side of the road, and looked up at the hillside opposite. You can us 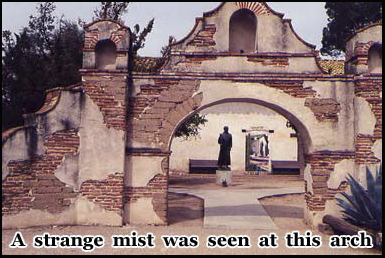 just make out the path of the old highway outlined in the dirt. It was along here that on Sept 3oth 1955 that James Dean drove his Porsche Spider before colliding with a 1950 Ford Coupe driven by a man called Donald Turnopseed. He was killed on impact at around about the area I am now standing. After the accident  the wreckage of James Dean’s car was sold for spares. Many people who ended up with the parts in their own vehicles were either killed or injured leading to the suggestion that the car was cursed. In 1960 the partially restored car was shipped out to Los Angeles but somewhere along the journey it vanished and never arrived. If you head a few hundred yards up the road to Cholame there is a commemorative sculpture built round a tree in front of what is now a restaurant. It was financed by a Japanese business man, and has the actors name inscribed on it. Its metallic surface is supposed to reflect the scene of the crash site several hundred yards away. I stopped there for a few minutes before continuing along the road towards the Mission San Antonio de Padua. It’s a slow narrow road, but quite scenic with lots of vineyards and open fields along the way.

The mission and its hauntings were something I read about in a ghost book. It is not too difficult to find, and it is not the sort of place that gets overrun with tourists. In fact most of the time I walked around it, I was the only one there. I arrived at about 2 pm. The Mission San Antonio de Padua was originally built in 1771, but what is here now is mostly a restored building.  At the entrance you walk through into the courtyard beneath a arched gateway. It’s a Spanish style monastery with red tile roofs. It reminds me of one of those ranch buildings you see in Mexican cowboy movies.  It 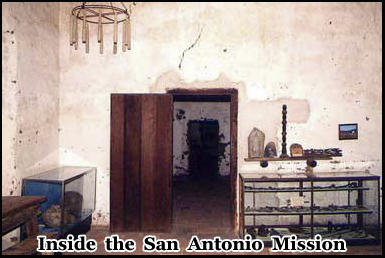 actually lay abandoned for 50 years from 1882 to 1928. Although the mission was partially rebuilt at the start of the 19th century the San Francisco earthquake of 1906 was responsible for its collapse and continued neglect. The hauntings at the Mission San Antonio de Padua include those of a monk, and also a headless American Indian women that has been seen riding her horse on the adjacent military reserve. The latter was seen by military police who tried to chase the apparition before she vanished in front of them. The mission itself is a series of small rooms, leading from one to another with artifacts showing how the monks used to live and work in times gone by. There is also a chapel which is still used by local residents and Franciscan monks.  If you walk around to the side of the church there is a very impressive Gothic looking cemetery.

There’s a big plaque on the wall that explains how most of its inhabitants are American Indians. This mission is one of a series throughout California, but this one is the only one in such a secluded out of the way place, as the others are in city center locations. The monastery was rebuilt in the 1920’s from money donated by the newspaper tycoon William Randolph Hearst. I personally never associated California with having such old and historical buildings, but as you walk for through the old stone rooms when there is no one about, you almost forget where you are. There i 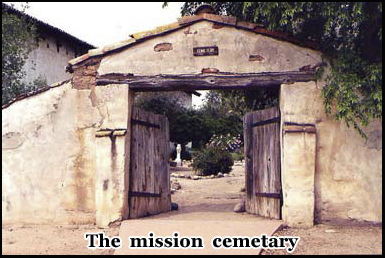 s definitely a sense of mystery about the place. Part of this is because of the seclusion of its location, and part of it is the various rumors and legends about its ghosts. There is ongoing archaeological work going on in the Mission San Antonio de Padua grounds, and many of the discovery’s are on display in the various rooms in the building. It was during a visit by some field archaeologists, that they saw a mysterious cloud of mist that floated through the central arch at the front of the mission to the fountain in the center of the garden and then back to the church door.

It is a very quiet and serene place, and the apparitions that have been seen have never been described as evil. The local community is actively involved in supporting the mission and its parish, and it’s interesting from a historical as well as a supernatural point of view.

Ghost Hunting From Monterey To Big Sure – KSBW8 News

A Virtual Tour Of The Californian Missions – Mission Tours