Electronic does not mean scientific. E.M.F meters and digital thermometers are not ghost detectors. When one of these or any other instrument registers a change in environment unless there is a credible link established with an apparition, although it may be unexplainable, it is not an indication of a haunting. The fact that the readings occurred in a haunted location doesn’t mean they have any relevance to a ghost, this is just an association, and association is not a scientific process. A credible link also does not mean an E.M.F reading occurring at the same time that an Orb appeared. This doesn’t validate the Orb or the E.M.F reading. Linking one non paranormal phenomenon with another still does not make either paranormal. With an E.M.F meter the biggest assumption you are making is that ghosts are energy and that this type of energy can be measured with a meter that was originally designed for use in building construction. Even if you’re in a haunted location and your battery’s or electrical equipment starts to fail you can’t attribute this to a ghost and therefore assume they are using this energy to “manifest” unless you have proof of this. There isn’t any. If a “ghost” is causing a battery to drain, then although it is causing an impact on its immediate environment that still doesn’t prove what its composed of. If a ghost can appear by utilizing man-made energy, then as virtually everywhere in the world has access to this, surely we should be overrun with ghosts.

Virtually the only people that take prolonged E.M.F and temperature readings of a house are paranormal investigators as they attempt to use these devices as ghost detectors. For the readings to have any independent meaning relevant to a haunting, there has to be a set of control readings for comparison. This would mean investigators would have to spend an equal amount of time in a non haunted location of an identical geographic and structural stature. As traditionally paranormal investigators don’t investigate locations that are 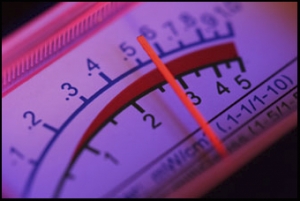 not meant to be haunted then a set of control readings is unlikely to be established. Take into account that even if they did, conditions in both locations would have to be identical not similar, for the results to have any validity. Most electrical appliances are Alternating Current (A.C), and so are the majority of E.M.F readers. But even if you are using a Direct Current (D.C) E.M.F meter, although they will eliminate A.C readings they can still be triggered by thunderstorms, the earths own electrical field and even the electrical energy that your own body generates, all of which are also D.C. When it comes to the paranormal the purpose of using E.M.F meters as ghost detectors is to determine if  the readings they give are of paranormal origin. But even if you have turned off the power to the location being investigated at the mains, you still can’t eliminate a man-made source. This is because electrical energy will still flow through the wiring, even if the sockets are dead. In addition to this other battery powered equipment you may be carrying, such as a video camera, or mobile phone can trigger an E.M.F meter and this is particularly true of K2 Meters. This can of course cause a false reading even when you are outside. In addition to electrical devices moving metal objects can cause fluctuations on E.M.F readers as they are creating changes in the magnetic field . An example of this could be an investigator using a pendulum in the proximity of a meter. Or even someone using a amulet or cross that they place near a meter for protection. One important point that is often ignored is that when people try to interact with an apparition they usually try to film or record it. This means that electrical equipment such as a camera will be activated which may not be when contact isn’t being attempted. Electrical equipment has been proven to have an effect on readings from many devices used in the paranormal and any results will be invalid unless your can discount their influence. Other factors to consider in this environment are both overhead and underground power lines, and high iron content in the soil. For the readings from one of these instruments to have a credible connection with a haunting they need to consistently register only in the presence of an apparition. Consistently does not mean, fluctuating 20 times and then an apparition appears, it means only registering when an apparition appears, or beyond the realms of coincidence. If you want to claim an E.M.F meter is a ghost detector there are rigid protocols that you have to meet.

Without a link to an apparition, you can’t rule out a reading as being a psychic intervention originating from a living person. If you are holding an E.M.F meter or using a digital thermometer, you want it to register a fluctuation. And if that is what you are hoping for either consciously or subconsciously, perhaps it is you that is causing the reading. This is another reason these device can’t be considered ghost detectors. And although this scenario may seem unlikely, which is more unlikely, the origin being that of a dead person or that it originates from the mind of the living. In regard to specific types of equipment many investigators still use point and shoot digital thermometers, in the mistaken belief that they measure air temperature. However they don’t measure air temperature (ambient temperature) they only measure surface temperature which is not comparable. If you have a cold spot a few feet in front of you and you point the thermometer at the cold spot it will actually measure the surface temperature of the first object that it comes in contact with which could be as much as a hundred feet away. The surface of an object is reflective and even if it is in the same area as the cold spot the reading still wouldn’t be accurate, because it’s not measuring air temperature.

But although they cannot be legitimately used as ghost detectors Some of these electronic monitoring devices such as E.M.F meters and digital thermometers do however have a purpose not related to proving the existence of a haunting, but to finding a more logical explanation for one. Exposure to abnormally high levels of E.M.F readings may over a prolonged period of time cause certain people to hallucinate, although this is still just hypothetical and is not conclusive. And cold spots can also cause people to believe normal occurrences are paranormal due to an association of temperature drops with ghosts, but theses are both psychological issues not paranormal ones.

In conclusion there are 8 key points to consider

Is there absolutely NOTHING else apart from a ghost that could have caused a meter to trigger, and can you prove this is the case

The environmental conditions must be EXACTLY the same when taking a baseline reading of when you are attempting to interact with and apparition and when you are not. In particular the proximity and state of electrical, photographic and recording equipment must be replicated