Do Ghosts Only Come Out At Night ?

DO GHOSTS ONLY COME OUT AT NIGHT ?

The association of ghosts and night time is largely driven by myth’s. All the good horror movies and stories take place at night, as do most investigations on paranormal reality T.V shows. But is that any reason to believe that ghosts only come out at night ? And that’s when you should investigate. The answer is no. If you look at the reported number of ghost sightings that occur during daytime versus nighttime the nighttime ones are only slightly higher. And of course part of the reason for this could be that most of the time people just aren’t at home during the daytime, they are either at work or out. However the daytime sightings are actually more credible because of the added visibility. It can take anywhere up to 20 minutes for people’s eyes to adjust to low light at night. And don’t forget you may be in a heightened state of anxiety in the dark, and as a result the same sights and sounds you may think are paranormal at night you might have dismissed had they occurred during the day.

Photography and video has a far greater range and clarity in daylight, and due to the fact that you will not be using infra red night vision on your camera the amount of “orbs” you get will be greatly minimized as the dust, dirt and moisture that creates them will be less visible under normal light. As for the argument that many pieces of paranormal equipment are designed to work at night and that’s why people investigate only at that time. The solution is to just not use them, and find equipment that does work in day time. There is plenty of it out there. Complying to the “ghosts come out at night myth” because it was on some silly T.V show is simply helping to spread that myth. If for some reason the client or venue can only accommodate your request for an investigation at night. Why do you have to go there and then switch out the lights to decrease the capability’s of your equipment and your own vision. The answer is you don’t.

The other justification for carrying out a paranormal investigation at night is that the clients report that they only see the ghosts at that time. One of the possible reasons for this is that in many cases they just simply aren’t there during the day, they are either out or at work like most people. So how would they possibly know if the ghosts never appear during the day ? The facts are that “ghosts” have been reported as being seen during the day and the night. So just because one person only sees them at a particular location at nighttime is no logical justification to only conduct an investigation at that time. That would be like saying if someone only watches T.V at night then there are no programs on during the daytime because they never watch them.

It has been suggested that the use of infra red eliminates shadows that may be created by other artificial light sources, and that they could be mistaken for something of a paranormal nature. This is not correct. Although you can’t see it, infra red is a light source and will create shadows just as a light source that you can see would. There is also no evidence that paranormal activity is more 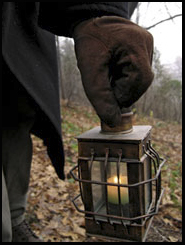 likely to be picked up in the infra red light spectrum as opposed to that of conventional light.

In the instance of the residual energy hypothesis where a ghost is merely repeating an action it performed in its lifetime, like us it was far more likely to be active during the daytime then at night. Another unfounded theory is that the man-made energy generated during the day may interfere with a ghost’s ability to manifest themselves. But if ghosts are energy then they would be D.C which is the type of energy that body generates before death, not A.C which all man-made energy is so a higher presence of A.C energy is irrelevant.

It had also been stated that the act of physically turning the lights out will eliminate the possibility of getting erroneous E.M.F readings. This isn’t correct as even if you do turn the lights out electricity still flows into the sockets and throughout the wiring of a location. In addition to this many paranormal investigation groups utilize D.V.R’s with remote cameras that require powering from the mains so although you may reduce one A.C source you are introducing another. You should be taking a base line reading with your monitoring equipment prior to the investigation and then comparing any fluctuations in readings with that. This would eliminate any need you believe you have to switch off any power sources. But regardless of this E.M.F meters are not ghost detectors they just measure the environment so their importance in paranormal investigation is minimal.

The most far fetched explanation regarding why you should ghost hunt in the dark is that ghosts are more comfortable in the dark and more likely to appear. What have they got to be afraid of exactly, their already dead?

Neither are ghosts easier to see at night. Even if they do glow you can still see a glowing object during the day, just look at any electric light. Or if they are white or translucent as many are claimed to be turning the lights off isn’t going to make them more visible. And as so many ghosts have been reported as being shadow figures obviously a shadow is going to be harder to see in the dark. And if you think a good reason for investigating in the dark is that this will eliminate the possibility of light reflections being mistaken for “ghosts”. If you can’t tell the difference then perhaps you shouldn’t be investigating at all.

One of the other main reasons for people claim that you should ghost hunt at night is that it will cause some of your senses to be in a heightened state of awareness, in particular your hearing. This may be true but then it has come at the expense of your most important sense which is vision. In everyday life which is considered more significant in terms of witnessing an event. Is it sound or vision. If the police were investigating a murder, which would they give more weight to, someone that heard a murder or someone that saw it ? And if your emphasis is on E.V.P rather then video which is why you are not as concerned about video. Why ? And most video records sound and pictures. The same can not be said of tape recorders.

Something else to consider is that by investigating late at night and into the early hours of the morning you are going to get fatigued because this is probably going to be outside of your normal sleep patterns. So in reality your awareness will not be equal to that of daytime it will be considerably worse. Sleep deprivation can cause poor judgment, and in extreme cases hallucinations.

Another excuse for investigating at night is that the area will be less likely to human contamination. That has nothing to do with investigating at night, that has to do with ensuring an area is clear of everyone apart from who ever is conducting the investigation. This can be done at any time. And even if the investigation has to be conducted at night for logistical reasons this still has no bearing on why the lights have to be out. Why not do it during the day and close the curtains, if you think it has any scientific relevance? The question, do ghosts only come out at night, is rarely raised on reality T.V shows because they are all about entertainment not science.

And what about the claim that its going to be quieter at night ? It may be if in the rare instance you happen to live 10 feet from a major freeway or railway station. But if the noise is going to be that excessive during the day then you will have invested in double glazing or another form of sound proofing. And if it’s going to be so loud that its going to interfere with peoples ability to hear, or record sounds or voices then the location would be uninhabitable. But even in high noise areas it doesn’t mean every section of the area being investigated is going to be noisy. If it is facing a busy main road then just make your recordings in the rear of the property where its quieter.  As for the ghosts, then if they are having problems being heard, cant they just talk more loudly. Just like they did when they were alive ?

Do ghosts only come out at night. Clearly the answer is no. One of the actual explanations for why paranormal investigators get more evidence at night is because they have never tried investigating during the day. If investigators just acknowledged that one of the main reasons they investigate at night is because its “spookier” then they wouldn’t have to come up with what are sometimes far fetched justifications. The rule about only investigating at night is like any rule, if you never venture outside of it, it can actually become a restraint.

Do Ghosts Only Come Out At Night ? – Paranormal Magazine

How To Avoid Encounters With Ghosts – WikiHow