Dean Haglund gives an exclusive interview to Chasing Midnight and talks about ghosts, psychic spies, UFO sightings, the paranormal and of course the X Files.

Your most well know for you portrayal of Richard Langley one of the X files Lone gunman, but you in fact have a long and varied career, tell us a bit about your background.

“It’s a green screen! (My background? Special effects? Anyone hello?) Okay. I come from Canada and was acting since I was 12 when I was doing children’s theater and moved into the comedy racket when I was old enough get into a bar. And I never looked back.”

People may be surprised to learn that you may have more things in common with your Lone gunman character then they are aware of.

“Yes, including me. I have invented a laptop cooling system called a Chill Pak.”

Do you think your fame as one of the Lone Gunman has helped you pursue your interest in conspiracies ?

“Yes, I didn’t really know much about them till I started researching my character and then meeting real researchers and occult scholars and ex-military dudes. And the stories were too fascinating to be ignored. All of them would probably make great movies“

Although a fictional T.V show do you think the X files influenced people to take a greater interest in real life UFO incidents and conspiracy theories, and maybe even to question what their own government may be hiding from them?

“I think that may be true, but there is also an alternative viewpoint and that is the Government keeps creating shows like the X-files so that when real life UFO or paranormal occurrences happen they can all say “you watch too much TV.” Even lead singer, Perry Farrell refused to participate on the X-files CD that came out a while ago because he said that X-files set back “Human/ Alien relations by twenty years” They are using the media to dazzle and confuse us from the truth.”

Do you believe that earth has been visited by extraterrestrials, and if so what is your most compelling evidence to support this?

But then what are these things, and I know from my mathematician friends that the math indicates 11 to 13 other dimensions existing right around us all the time, with it own set of physical laws and functions. These would also be extra- terrestrial. And I would think that D.A.R.P.A and other military branches are working in these fields and getting multi dimensional vehicles or something like that in those particle accelerators they build everywhere.

So I would say we are visited but it could be others who are right in front of us and they just happen to change frequencies where we can see them. Of course, the recent report by the Brazilian air force also is intriguing and argues against everything I have just said here. So that puts me back into the “I dunno” Category. “

Conspiracy theorists are often labelled as “crackpots”, do you think there is an element that deserves this label?

“Unfortunately, paranoia is a sliding scale and some is healthy and a lot is an imbalance. So if you have lots of time and can follow some odd occurrences in your life and make a few logistical jumps (not everyone is trained in logic) then you can drive yourself crazy, quite literally. And some do. Others are clearly part of something, and choose to remain silent; I have met them as well. But “crackpot” is also comforting to those who don’t want to believe. Like in the Matrix when Joe’s character chooses to go back into the Matrix, He says “I know it’s fake, but it tastes so good.”

The X files character you played was part of the Lone gunmen which was a reference to the Kennedy assassination; do you think there was another gunman involved apart from Lee Harvey-Oswald?

“Yeah, I do. Even the 1975 acoustic ballistic tests found that a second gunman had to be involved. And that was commissioned by the government. A mob hit, a Vietnam cover-up, or something darker. “

Do you think we will ever know who killed Kennedy?

“They were supposed to open the files on that soon, but Bush just pushed that date indefinitely into the future. That and his Dad’s records as well. “

Which conspiracy do you find the most disturbing if true?

“I would have to say the H.A.A.R.P project which we know bounces 3.5 gigawatts of electricity off the Ionosphere from the University in Alaska, to help, they say, with cell phone reception. But if you research brainwave and neural disruption devices they are basically electric fields that alter brain wave patterns. So is H.A.A.R.P a mind control device…? Let me just tell you that my cell phone still gets crap reception. “

Do you have an interest in the paranormal, what are your beliefs on ghosts, and the afterlife if there is one?

“I love a good ghost story, and I think that no energy is ever destroyed, as Einstein stated… So whatever keeps us going would seem to have to the ability to go somewhere else. And for those who don’t read up on science you wouldn’t know that your energy could go anywhere else so you stick around and scare those who remain. Next time you see a ghost, explain quantum mechanics and tell them to move on.”

As a result of the freedom of information act, the U.S government has bee 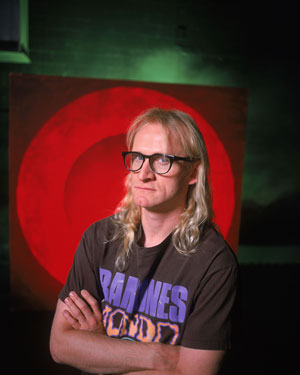 n forced to release some of its previously top secret documents to the general public; do you believe that the government would ever really release information that would implicate them?

“John Greenwald Jr. has been getting Government info through the FOIA since he was fifteen and putting it all at his site, the www.BlackVault.com. Here huge amounts of info are blacked out and key details are lost. So I think we will know everything one day, but it won’t come from the powers that be. Some other revolution will bring on complete disclosure.”

The CIA acknowledged that they employed “psychic spies” known as remote viewers under their Project Stargate programme, they claimed to have discontinued their research in 1995; do you think we should take their word for it?

“I think that they have discontinued the “research” and now employ them full time. All those books, like the Psychic warrior and the like lay out the way it is done and what they saw. The simplicity of it and the results would say that from the 70’s till 95 you probably got it all mapped out and then just hire as needed. Research is over.”

As Dean Haglund you have traveled around the world with you stand up comedy, and convention appearances, do you find that there are particular country’s that are more into conspiracy theories and have a stronger belief in the paranormal and UFOs then others ?

“No, they are all pretty good. Some seem to have more distrust of their government than others, and all seem to know that the US has some sort of hidden agenda. But the UFO stories stay fairly consistent and the ghost stories relatively, some would say eerily similar.”

What do you say to the skeptics?

“I would say, prove that I am wrong and you are right. I present this plethora of information and facts. Now you prove that my conclusion, whatever it is, is wrong, because what was a conspiracy theory 5 years ago is now a best selling book by Carl Bernstein. Just because the research is ahead of the curve doesn’t make it wrong.”

What projects are you currently involved in, what are your future plans?

“Chill Pak, of course, and three or four movies on the go, perhaps hosting a show on Discovery. All too soon to say.”

Will Dean Haglund, Lone Gunmen be returning to the big screen?

“Hopefully, though we will have to find a way to come back from the dead.”

Thanks for your time Dean

His Film And TV Credits – IMDB

A History Of The X Files – Wikipedia

Every Episode Of The X Files Ranked – Vulture