Billy the kid was born in 1859, and killed in Fort Sumner in 1881. According to various accounts he had shot dead 17 people by the time of his death at 21. He was a hired gun during the Lincoln county cattle wars, in New Mexico, and was later captured and sentenced to death. While waiting for this sentence to be carried out, he escaped from the Lincoln County Courthouse. He killed two of his guards and fled into the surrounding New Mexico desert. On July 14th 1881 Sheriff Pat Garrett shot him dead when he caught up with him in Fort Sumner. After his initial burial at the “Maxwell house” where he died, Billy the Kid was moved to a nearby cemetery, and reburied with 2 of his dead friends. The inscription on the top of the tombstone reads “pals”.

I visited Lincoln after the Trinity test site, where the world’s first atomic bomb was detonated. It’s a

scenic three hour drive from there, and if you want to carry on for about another hour you will get to Roswell if you want to go UFO hunting. Another hour beyond that is Fort Sumner where Billy the kid was shot and killed. He was born in New York in November 1859 as William H Bonney. He is certainly one of the legends of the Wild West, along with Doc Holiday , Wyatt Earp and Jesse James. Lincoln itself is a small quiet town, with a population of about 150. It’s composed of a few dozen well preserved old houses and a courthouse. Most of them are connected in some way to Billy the kid or the other participants of what was known as the Lincoln county range wars of the 1870’s. It was about 2 pm on a Sunday afternoon. I parked the car at the side of the road by the heritage center; you can walk from one end of town to the other in a few minutes. There are several houses and small museums open to the public for a small charge, and you can buy a general access ticket that will allow you into most of them for one price.

The town certainly hasn’t become over commercialized and seems to be largely unchanged from the time Billy the kid and his gang of “regulators” fought here. It’s in a fairly remote location and probably not a major stop on the tourist trail. By the time Billy the

kid arrived here in 1877 he had already killed his first man. He started off cattle rustling then became a ranch hand for a Englishman by the name of John Tunstall. John Tunstall was later killed in 1878 by men employed by the rival, Murphy-Dolan cattle barons.  Billy vowed to track down and kill the men responsible and joined a gang of special constables known as the regulators which were officially assigned the task. As you walk along the main street there are various historical plaques recounting some of the key moments in the towns history. A few of the houses were actually burnt down during these range war battles and have since been rebuilt. I started off the tour in the Lincoln heritage center museum, which has many Wild West, and American Indian artifacts. There is also a short film that gives some background to the history of Lincoln County . Nearby there are some interesting shops selling homemade foods and locally made gifts and souvenirs.

If you walk further up the street there is what is know as a torreon, which is a small Spanish style stone structure similar to part of a castle turret. From the slits in the wall men on both sides of the

range war once used to fire upon their rival gangs. Towards the end of town is the Lincoln county courthouse. Billy the kid was eventually captured and tried for the murder of Andrew “buckshot” Roberts a member of the Murphy- Dolan gang, and he was imprisoned here after being sentenced to death. The courthouse is an impressive building and is well preserved. When I went there it was empty apart from the guide at the entrance, who will help answer any questions you may have about the buildings history. What it’s most famous for is the fact that on April 28th 1881 Billy the kid escaped from here, shooting dead two guards in the process. Downstairs there is a huge iron door to a one time jail cell behind which you can still see graffiti carved into the wall from some of its former prisoners. There are also many interesting exhibits relating to the escape and other events from that era.

This was in fact the second time Billy escaped from jail. The first time he made a deal with the state governor, to turn himself in for his part in the murder of a sheriff and his deputy. He was to be granted an unofficial amnesty if he testified against the killers of some state officials that at the time was considered more important then his own prosecution. But while awaiting his trial, although he was promised the outcome would mean he would not face jail or the death 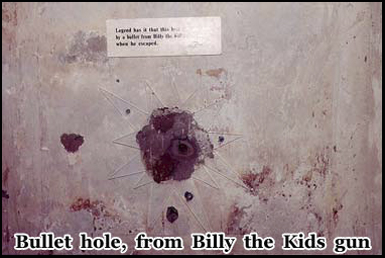 penalty, he went on the run. The polished wood floorboards creak loudly as you make you way around the building and upstairs to the courtroom. On the second floor, there is a taped off section on one end to show where the jail cell that once held Billy the kid stood. If you look out from the courthouse window there are two stone plaques in the ground to mark the spot where the guards that Billy the kid shot, died. Although the exact details of the escape are not entirely known, it is believed that either a pistol was left by someone for Billy to aid his escape or he stole the pistol from one of his guards. J.W Bell was shot by him as he came up from the bottom of the stairs, before staggering outside to die. Then the outlaw lay in wait for the second man Bob Ollinger, to return from across the street where he had been having lunch. Billy blasted him with both barrels of a stolen shotgun from the upstairs window.

As you walk back to the ground floor, in the surroundings of the old courthouse its not to difficult to imagine, the footsteps of Billy the kid thundering down the stairs a hundred years ago as he made his desperate bid for freedom. At the very bottom there is a bullet hole in the wall, covered with P

erspex that was supposed to be from a gun he fired when fleeing the building. If you make your way out of the courthouse and back along the main street there is a hotel called the Wortley Pat Garett Hotel. Rebuilt in the 1960’s this was at one time called the Lincoln hotel and was part owned by Pat Garett, who was to eventually shoot and kill Billy the kid at Fort Sumner. After leaving Lincoln County I stayed in Roswell for a few days, famous for the 1947 UFO crash, then continued my journey north to Fort Sumner where Billy the kid died, and is also buried. As you drive into Fort Sumner there is a Billy the kid museum on your right hand side. But if continue to the end of the town, you will find the small graveyard where he is buried and a few hundred yards away is the former site of the house where he was shot by Sheriff Pat Garett.

I decided to go to the house first. There’s a park and a visitor center which tells you about the history of the area, and there are still a few remains of other buildings. However I was a bit disappointed when I followed the sign post to the house. There is actually nothing left to see but an empty piece of land. The entire building was swept away along with a large piece of F

ort Sumner when the river flooded in the 1920’s. So you really do have to use your imagination on this one. But there is a black and white photograph of the building which once was the Maxwell ranch house, and you can see that it was in fact quite a large two story wood structure. Billy the kid had rode in and out of Fort Sumner several times before he finally met his death here and he once killed a man called Joe Grant who boasted that he was going to become famous by killing the Billy the kid. This was not to be, but on July 14th 1881 it was Pat Garett who actually achieved that fame. There is still some question as to whether Pat Garett who was now Sheriff Pat Garett of Lincoln, was ever a friend of Billy’s although they had met before. On that night Billy entered the Maxwell ranch house where he had been staying, and Pat Garett was there waiting for him in the dark. Billy the kid was shot in the heart and died instantly, although others believe that he was in fact shot in the back.

Billy the kid was in fact initially buried somewhere on the ranch property where I was now standing, but after so many people began to visit the site, it became disruptive to the day to day running of the

ranch, so he was reburied a few hundred yards away in the cemetery. It’s a short walk away, just off the main road I had driven in on. There is a privately run museum next to it, where for a few dollar admission fee you can buy items of Billy the kid memorabilia and look at various pictures and related exhibits. I had a quick look round, and bought a few postcards. I then walked around the corner to the adjacent graveyard. It’s a small well kept cemetery with a few dozen other graves, but the center-piece is that of Billy the kid. A path leads directly to what is a large stone double gravestone protected by a cage. The thing I noticed is that on the top of the tombstone is inscribed the word “pals”. This is a reference to the fact that Billy the kid was in fact buried with two of his best friends, Charlie Bowdre and Tom O’Folliard.

I remember seeing a reference to this in the movie about him called “Young Guns” with Emilio Estevez , and I always assumed the “pals” reference to be an invention of Hollywood, and I was quite surprised to see it wasn’t. There were quite a few tourists around,

taking pictures of each other in front of the grave, and there were even some fresh flowers placed beside it. And I got the impression that many had travelled some distance to be here. One thing to remember about Billy the kid, that after all his adventures, and his notoriety, was that he was still only 21 years old when he died.  Whatever your opinion of him, folk hero or outlaw, he is indeed a legend. But there may be an even bigger mystery, then the legend itself. In 1949 a man known as Brushy Bill Roberts claimed he was Billy the kid and that he hadn’t been killed by Sheriff Pat Garett in Fort Sumner. In Hico Texas there is a monument and museum dedicated to him. The man was interviewed on television by the well known American journalist Sam Donaldson in 1990 and there are at least two books and numerous websites claiming that he was telling the truth. But like all good mysteries there is of course much evidence to say he wasn’t.

Fact vs Myth – About

The Lost Photograph of Billy the Kid – The Daily Mail

The history of Billy the Kid – History Net