The Moss Beach Distillery was opened in 1927. It was formally known as “Franks Place”, and was frequented by gangsters and movie stars during the prohibition era. It is located high on the cliff tops near California’s highway one, an hours drive south of San Francisco. The Moss Distillery hauntings have been the subject of numerous investigations, and have featured in several TV programs. The most well known haunting has been that of the Blue Lady, believed to be of a women by the name of Mary Ellen that died in a car crash on the nearby highway almost 70 years ago, and is still seen wondering the cliffs and beach below.

I first became aware of the Moss Distillery hauntings from a repeat of the television program Unsolved Mysteries. I had just made a recent trip to San Francisco , and if you are heading back down the coast via highway one, it’s only a few minutes drive out of your way. The day I got there the 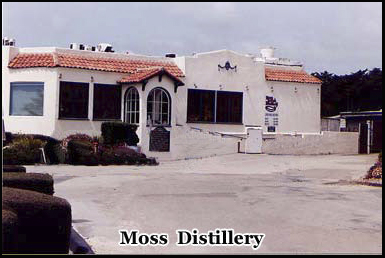 weather was slightly overcast and the ocean was a dark grey. The distillery stands on a cliff top overlooking the sea, but even on a cloudy day the views are quite extensive. The distillery is in fact a well known seafood restaurant and bar. If you go to their official website, they have a short promotional video that aside from some background history includes information about the ghost, who is referred to as the Blue Lady. I had lunch inside the restaurant, but they also have an outdoor dining area where you can sit when the weathers better and look down to the beach. The bar still retains its original 1920’s decor and is popular with the locals and tourists alike.

The origin of the blue lady dates back to the era, of gangsters and prohibition. She was a woman by the name of Mary Ellen, who although married had an affair with a piano player named John Contina. According to legend they used to stroll together along Moss Beach below the distillery. But the affair came to end when she died in a car accident on the nearby Bay Shore highway. Although Mary Ellen wasn’t aware of the fact, John Contina was himself seeing a women by the name of Anna Philbrick. She was supposed to have committed suicide by jumping from the cliffs that surround the distillery.

John Contina eventually met his own violent death when he was decapitated, and his body thrown into the sea near by. Who did it and why, remains a mystery. Over the years t 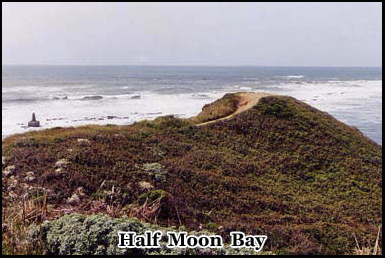 here have been many unexplained instances of doors banging, and furniture being moved in the distillery. The apparition of the Blue Lady has also been seen in the men’s room and on the nearby cliff tops warning children to stay away from the cliff edge. After lunch I made my way back out into the car park, there is quite a steep drop from the rear of the restaurant, and on this particular day the sea did look quite dark and ominous. The wind was also up, and howled around the exterior of the building. Probably the most famous incident regarding the Moss Distillery hauntings occurred in 1978. This involved two police officers who attended a seance at the distillery. After they left, they were involved in a car accident, although both escaped serious injury. They were sent to hospital for a check up and while they were there, they were visited by a highway patrol officer who attended the accident scene soon after it occurred.  He asked them what happened to “the lady dressed in blue” that had appeared out of the darkness and then vanished.

Beside the car park there is a steep path down from the cliffs, which you can take all the way down 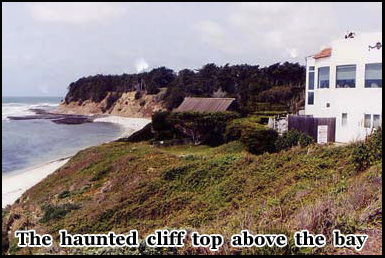 to the sea. And particularly during the summer months the area is very popular  with tourists. The ghost of the Blue Lady has definitely played its part in this. But over its long history apart from ghosts, many others have passed through the distillery’s doors. When it was known as “Franks place” during the prohibition era, it was a hang out for gangsters and movie stars. And these days the occasional modern day celebrities make their way down here from San Francisco. The Moss Distillery Hauntings have been investigated by several paranormal research groups in recent years, and the staff and current owners still report many unexplained occurrences. I was here at about one o’clock in the afternoon.

But I should imagine that at night time, when there are few people around, it could feel quite desolate on the cliff top surroundings of the small sparsely populated area of what is known as Half Moon Bay. And maybe the Blue Lady does still continue her lonely walk along the beach far below.

The Legend Of The Blue Lady  – Moss Beach Distillery

The Ghost Of The Blue Lady – Unsolved Mysteries